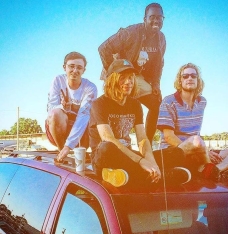 The split quickly came together after Camp Life made a tour stop in Ames, Iowa, and played a show with Arizona Landmine. “We booked the gig and Camp Life ripped,” said Arizona Landmine vocalist Griffen Clark. “After seeing them play, we knew there was something special about the band.”

The same sentiment was reciprocated from Camp Life’s Nick Lauve. “I really dig Arizona Landmine and their music,” said Nick. “Their side of the split is great, and I’m really stoked with how the whole thing turned out.”

Each of the first two singles – one from each band – touch on different coming of age topics. Arizona Landmine’s “Glow Up” was written after a month of not drinking for Griffen. “I wanted to grow as a person, but cutting out my vices only amplified my anxieties,” Griffen added. “I wanted the song to be about discovering the good and bad parts about yourself, and accepting them.”

“Thrasher Hat” takes a different approach and causes listeners to compare their lives others. “The song is about learning to be in charge of your own health and well-being,” Nick said. “It’s also about seeing how other people live and thinking ‘Is that right? Am I doing this wrong?'”

“Glow Up” and “Thrasher Hat” are available now, with the entire split out on August 31.

“The Heavens, Earth and Sea” – Marrowstone

“Automatic Writing” – The Way Out

“…If Only We Could Hear Them” – Kidlat Punch

“Live on HNFM” – I Forgot To Love My Father